Raw Apricot Seed has the highest concentrated levels of B17 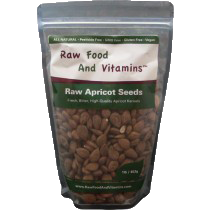 As it is mentioned in other parts of our site Dr. Ernst T. Krebs, a biochemist, discovered Vitamin B17 at the beginning of 1950 and he named its pure and concentrated form Laetrile.

The raw apricot kernel has the highest concentrated levels of B17 than any other seed. The apple seed is second. When you eat an apple, eat the whole apple, including the seed.

You may have heard the saying when you were growing up, “An apple a day keeps the doctor away,” but we were told all our lives not to eat the seeds which is a total contradiction to what our bodies need. All kernels are good for you except for citric seeds.

The Vitamin B17 (Laetrile or Amygdalin) will target and kill the cancer cells while it builds up the immune system helping future outbreaks of cancer. If you are taking the seeds to prevent cancer, then 7 to 10 kernels a day is all you would need to take. If you already have cancer you will need high doses of Laetrile (Vitamin B17) where you can take up to 60 kernels a day, plus the Vitamin B17 in the form of pills and injectable.

Another reason to eat raw apricot seeds is there is more than just B17 in the kernel. It carries not only B-17 but also B15, enzymes, and other nutrients in the seed as it is a whole food. So, when you extract B-17 out of the seed and put it into tablet form, all you have is the B-17.

It is crucial to take pancreatic enzymes while you are on Laetrile (Vitamin B17), you will also need important nutrients that will help the Vitamin B17 work even better and these are:

1- Zinc (which it will be the Laetrile transporter)

When you get your seeds, they will last up to three months in the refrigerator. Some feel they are good up to six months, but I would suggest eating what you order within one to three months and then reorder before running out.

We have raw apricot seeds packaged which have not been sun dried, not frozen nor cooked, they are RAW. You should not cook them or freeze them as you lose the potency they carry, being a raw, whole food.

You can order enough seeds to last you for three months to avoid more shipping costs as you would if you were buying 1 package of seeds at a time. It may be hard to tell if they go rancid due to them already being bitter. So, in my opinion, keeping them up to three months is best.

You can also use a product that we sell, The Make Your Own Capsule Pack, where you grind the apricot seed to powder form and fill the capsules and swallow them.

You can grind them and put them on a fruit salad or you can simply chew them plain. Some people can chew them without adding the seed to other foods and some people cannot get past the bitterness.