The possible anti-neoplastic effect of pancreatic enzymes was presented, since the beginning of the century, by Dr. John Beard, a well-known embryologist.

In that way, the fetus incorporates in his tissues those trophoblastic elements that have in their genes the memory of presenting a regression process to its malignant embrionary character.

From these studies, the Unitary or Cancer Trophoblastic Theory was developed. Also, Dr. Beard discovered that when the pancreas of the fetus starts functioning (in the human being after three months of gestation), the trophoblastic tissue loses its malignant characteristics.

According to this ingenious investigator, this is caused by the high presence of pancreatic enzymes. But still, it was not until 40 years later when the Krebs doctors started the use of Amygdalin (vitamin B-17) as an anti-tumor agent, and accepted the trophoblastic origin of cancer, that they thought about the brilliant idea of using pancreatic enzymes to influence the tumor tissue behavior.

From the pancreatic enzyme complex, it was found that proteolytic enzymes were the ones that caused the anti-tumor effect. By that time, proteolytic enzymes started to be used as anti-inflammatory agents, post-traumatic especially, by the lytic effect over the abnormal proteins generated in the injured area.

According to the Book World Without Cancer, you can get the enzymes in raw organic pineapple, or you can buy the digestive enzyme in a tablet form called Megazyme Forte’.

One important function of enzymes is the breakdown of older cells that have fulfilled their useful function and need to be recycled. This is a major process whose importance is commonly overlooked.

Think about it, though. Would you rather your body contain older, less efficient and lethargic cells, or would you prefer to have a larger portion of younger, more efficient cells, producing your energy and performing their life functions? In which case do you think you would feel better and be healthier? In which scenario could you better withstand the attack of free radicals and old “Father Time”?

Thanks to enzymes, virtually billions of cells are broken down each day and the proteins, lipids and other ingredients of which they were made are recycled and used to produce new, more active cells. Given that our age, or at least our relative vigor, is linked to whether our cells are efficient and alive or mere “deadwood,” the importance of enzymes is clear. If adequate levels are not present, the body simply can’t rid itself of the old cells and make room for new, more efficient cells.

Where do we obtain our enzymes?

Most are manufactured in our body. Others must be obtained from our diet and increasingly from supplements. Keep in mind that enzymes are very sensitive to heat, and most of them are destroyed by cooking. As a result, the foods we eat may well be lacking in the enzymes they originally contained. That is why it is so important to include a reasonable amount of raw fruits and vegetables in our diet. What’s more, these must be fresh, as enzymes are very active chemically and do not remain stable in the produce containing them. Keeping them cool is also important, because the enzymes are used up much more quickly at warmer temperatures.

Nutritiona-oriented doctors often tell people to try using pancreatic enzymes with meals when they have symptoms of indigestion that cannot be attributed to a specific cause. It is also believed that proteolytic enzymes may improve immune system function.

In the bloodstream, certain proteins can be major factors in provoking aging and reduced health. One good example is fibrin, directly involved in the formation of blood clots. This, of course, can increase one’s probability of developing many of the well-known circulatory diseases, such as angina pectoris, atherosclerosis, thrombophlebitis, heart attack and stroke. As a matter of fact, it can be shown that a reduced “proteolytic potential” of bloodstream, that is, a lesser ability to break down protein, can be linked with increased incidence of cardiovascular disease.

Furthermore, research suggests that consuming a diet rich in proteolytic enzymes, as well as supplementing with them, can increase proteolytic potential, thereby reducing the risk of suffering such conditions.

What would you find in a product called Total Enzyme? 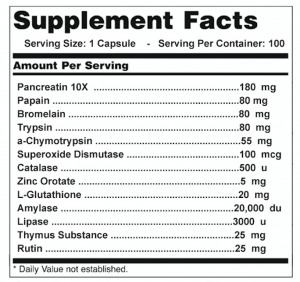 *Please note: This product is also a natural blood thinner.