What is Beta Glucan? 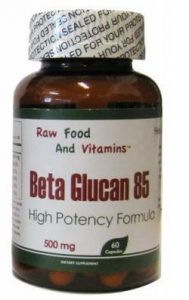 Beta-glucan… what is it?

Beta-glucan is a safe, natural fiber molecule extracted from the cell walls of yeast and other substances, resulting in supplements that better your immune system. Beta-glucan is being researched by scientists all over the world. Their research has revealed the many benefits of beta-glucan. Not only does this safe supplement work with the immune system to help kill cancer, but it works with other drugs helping to overcome cancer as well.

Beta-glucan enhances the production, the size, and the functions of the ¨good¨ cells to carry out the war against bacteria, viruses, fungi, and microbes.

There are many sources from where beta-glucans derive: yeast, seaweed, mushrooms, oats, barley, and the list goes on (up to 1500 sources). Even though it comes from yeast, beta-glucan is an isolate, where all potentially harmful proteins are removed so those who are allergic to yeast will not be negatively affected.

Beta-glucan is not only good for treating cancer, but beta-glucan also helps protect your body in various ways:

– Fights infections of all kinds

– Prevents the spreading of your cancer

Now that you know what beta-glucans are, it’s important to understand the difference in sizes and their benefits. Be sure to always look for beta-glucans that have small particle sizes (one to two microns) for the best absorption as many low-quality glucans contain large particulate sizes that tend to clump together once ingested.

Along with the information provided here, do your own research to ensure beta-glucan is right for you.